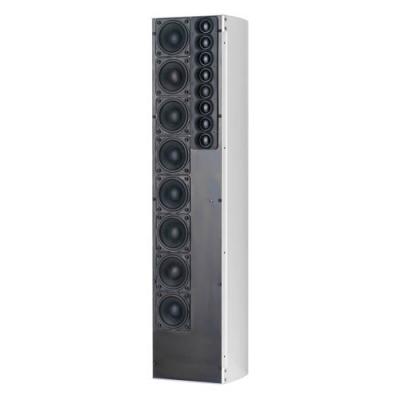 QFlex 16 is a compact standalone modular unit available within the QFlex range comprising of a single column array of 8 x 3 LF and 8 x 1 HF drivers each with its own discrete channel of amplification and integrated DSP. It can be used as a standalone self-powered column array device for both speech and limited BGM applications in smaller spaces where high intelligibility and minimal visual impact are driving concerns.

QFlex is quite revolutionary in that it is able to achieve even coverage and SPL which is maintained across the listening plane. QFlex is able to create an asymmetrical pattern which allows similar SPL's both in the near and far field. It is able to steer the beam away from surfaces that cause reflections to frequencies beyond 12 kHz making it the first digitally steerable array to maintain music quality over the desired area of coverage all in a very architecturally pleasing package.

The intuitive BeamEngine GUI allows the designer to specify target areas. Based on those target areas a steering algorithm is generated and tailored for that specific area rather than having to choose from a limited palette of opening and steering angles.

New features introduced on QFlex deliver more resolute safety and monitoring facilities making it fully compliant in any life safety or mass notification environment. In addition QFlex has been weatherised for outdoor or harsh environments without compromising on the product’s sleek aesthetic making it perfectly suited for large scale transport hub applications such as within airport terminals and major train stations. Among the key improvements on this front are the addition of Pilot Tone Detection capability Sentinel SM1 System Monitor and certification to IP53 standards.

Be the first to review “Q-FLEX 16” Cancel reply

There are no reviews yet.